Since its start in 1974, with Jack Nicklaus’ historic victory over J.C. Snead at Atlanta Country Club, The Players Championship has been one of the PGA Tour's most coveted titles. Held annually in May, The Players is one of the most anticipated tournaments on the PGA Tour calendar, boasting not only the strongest field but also the biggest purse on the PGA Tour. The Players Stadium Course at TPC Sawgrass is a golf course built with both the pros and the fans in mind. The course, owned by the PGA Tour, first hosted The Players in 1982 and is now the permanent home of the annual event. A true “Stadium Course,” the championship-caliber golf course was designed to improve the overall on-site fan experience at The Players, while also making it accessible to and playable by golf fans of all abilities. Working with renowned golf course architect Pete Dye, then-PGA Tour Commissioner Deane Beman created a course design that favored no particular player or style of play. The result has been a golf course that has tested the best on the PGA Tour and set the stage for some of the Tour's most dramatic finishes. From Jerry Pate's tossing Pete Dye into the lake on the 18th hole, to Tiger Woods' “Better Than Most” putt heard around the world in 2001, THE PLAYERS Championship never disappoints.

Difference between Stadium Pass and The Turn Tickets

Stadium Pass Tickets grant access to more than 19 on-site public venues; local food and beverage options; rope-side access to your favorite players. These are the Players Championship Tickets included in the travel packages above.
The Turn Tickets include access to an exclusive hospitality facility located on the 18th Fairway with outside views of #18 Fairway and Green, and inside view of #9 Fairway, The Turn provides a world-class tournament experience. A full bar with a variety of mixed drinks, food and beverages available for purchase. Integrated technology throughout the Turn allows golf fans to stay on top of all the exciting play on course through multiple HD TV feeds. Open seating inside and outside. Climate controlled interior with private restrooms

Sportstours has been operating since 1992, and a member of IAGTO since 2001. IAGTO (International Association of Golf Tour Operators) is the global trade organization for the golf tourism industry. Established in 1997, IAGTO's membership comprises 2267 accredited golf tour operators, golf resorts, hotels, golf courses, receptive operators, airlines, tourist boards, approved media and business partners in 99 countries including, at its core, 555 specialist golf tour operators in 62 countries. It is estimated that IAGTO’s operators control over 85% of golf holiday packages sold worldwide and turnover more than $1.7 billion per year.

Sportstours is an independent, privately owned company engaged in the service of locating and providing hotels, hospitality and tickets for admission to various sporting events throughout the world. We are not affiliated with, nor do we have any licenses or strategic alliances with, nor are we authorized by any box office, promoter, venue, theatre, stadium, professional sports team, college sports team or sporting association. Any and all copyrights, trademarks, or trade names used by us are for descriptive purposes only. We are not acting on the authority of or by the permission of any organization. We are able to provide hard to locate tickets for events through our many contacts and various sources. OUR PRICES CAN BE MUCH HIGHER THAN THE FACE VALUE OF THE TICKETS, depending on the costs to obtain them. The degree of difficulty to locate, availability and pricing can vary greatly from one event to another. 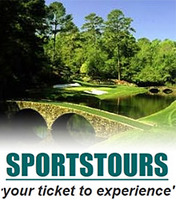 We are open during the following hours:

Get Social With Us